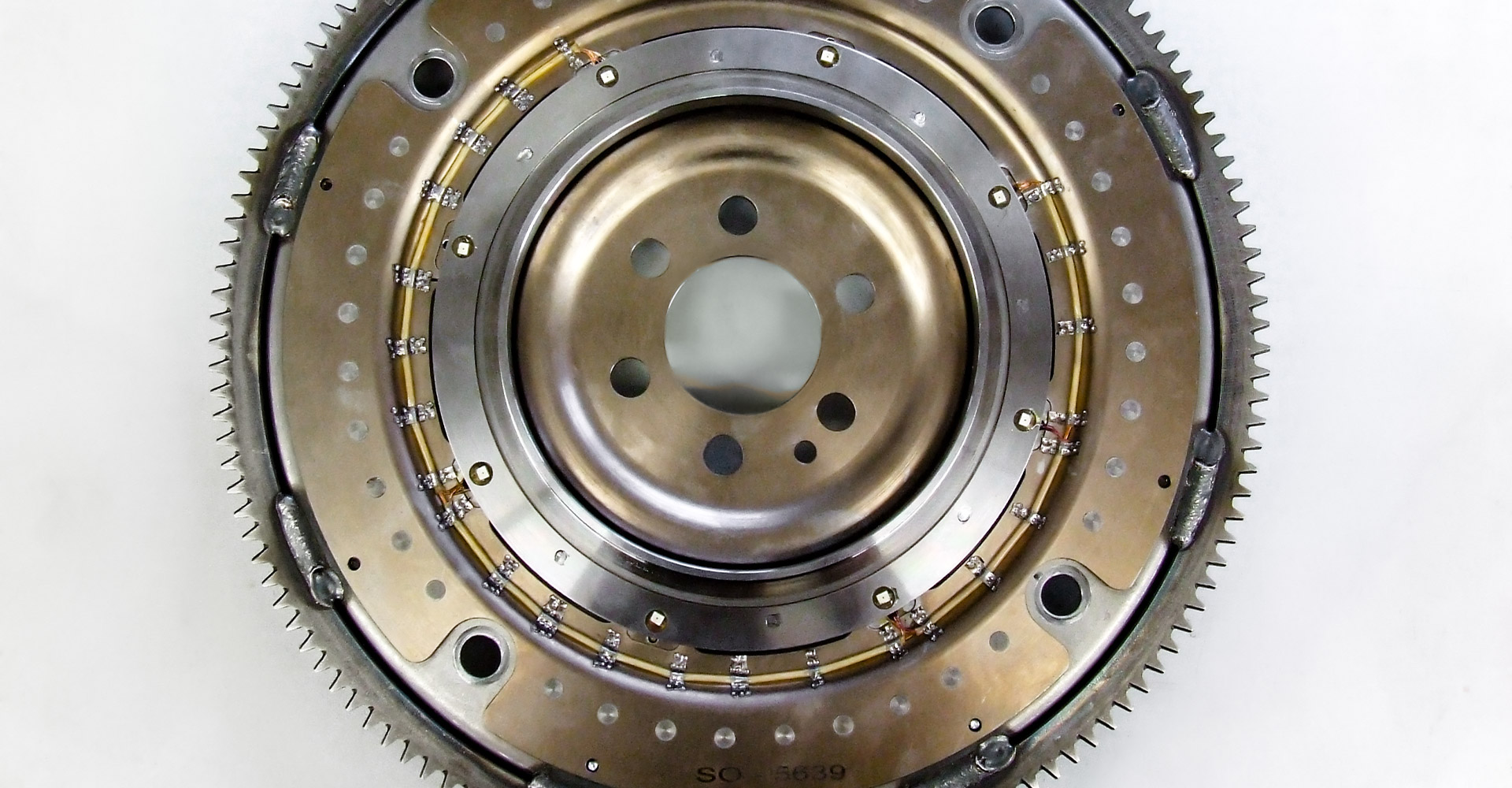 ATESTEO develops its own innovative flexplates for higher accuracy when measuring efficiency in drivetrains.

During drivetrain testing, flexplate torque is measured directly in the vehicle or on the test bench. The mechanical design of a flexplate is a decisive factor in its ability to measure accurately. The original component of automotive manufacturers is not created for a high degree of accuracy. To measure exactly despite this, ATESTEO has created its own flexplates that are exchanged for the original component during measurements. A study has shown that the ATESTEO flexplate displays a significantly higher degree of accuracy. Parasitic loads such as axial force, centrifugal force, or temperature that occur in the drivetrain are largely compensated so that these forces have minimal influence on the torque measurement output. The strain gauges react more sensitively and can measure more accurately owing to a targeted mechanical design. With its own flexplates, ATESTEO sets a new standard for measuring the degree of efficiency in the drivetrain.

The flexplate forms the link between the combustion engine and the automatic transmission. It is bolted to the crankshaft on the engine side and to the torque converter on the transmission side. It transmits the engine output torque directly into the transmission and must compensate for and withstand parasitic loads such as temperature differences, axial forces, wobble movements, and transverse and centrifugal forces. The flexplate is the ideal component for direct and highly dynamic measurement of the motor output torque. However, the component already installed by the automobile manufacturer is not designed for high-precision measurements. When torque is measured, the data would be inaccurate and the results neither meaningful nor helpful. 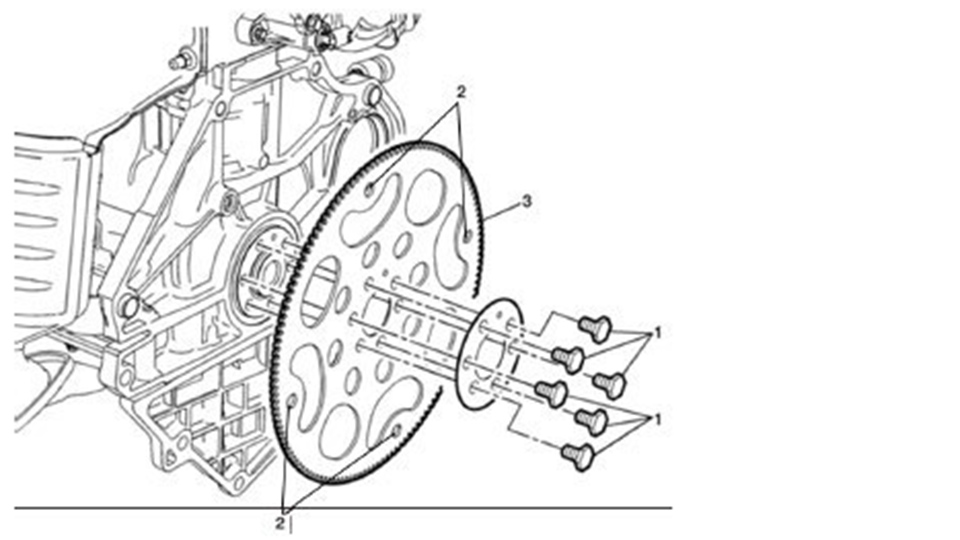 The ATESTEO flexplate (right) is many times more precise in measuring torque than the original component (left) owing to its mechanical design and steel poor in hysteresis.

ATESTEO is leading in drivetrain testing worldwide. Obtaining highly precise measurement data is the basis of all tests at ATESTEO. Even over 25 years ago, the testing specialist began to measure torques occurring in the drivetrain using a flexplate. During this time, innumerable designs and materials have been used to supply the most perfect possible torque measurement equipment for each individual measuring task. To obtain exact results with the flexplate, own components were developed at an early point in time. While the original component is usually made of thermoformed metal and standardised steel, at ATESTEO a custom measurement body is manufactured using heat-treated, low-hysteresis steel, whose behaviour with respect to bending and moment of inertia approaches that of the original flexplate as much as possible. The values of engine torque, maximum speed, number of cylinders, and type of combustion engine serve as the basis for the design. This has enabled ATESTEO to successfully achieve accuracies such as those of a torque sensor (torque measurement flange), which make possible a precise measurement of degree of efficiency in the first place. For this purpose, a series of calculations is performed on each individual measuring body using modern FEM (finite element method) software. Since FEM calculations only represent an approximation of the loads occurring in reality, the focus is on the type of meshing and the values of the parameters of the measuring body.

Every ATESTEO flexplate is an individual piece and custom-tuned to the respective type of vehicle. Its design achieves the greatest uniform deformation of the steel for the strain gauges. In combination with other compensation gauges, these are glued precisely at calculated and simulated positions using the hot-glue method. They are wired together in such a way that the parasitic loads are directly compensated for and a change in temperature has as little influence as possible on the measured torque. Transmitting electronics developed by ATESTEO which have been minimized in size transmit the output signal without contact as a frequency via infrared diodes to a fixed stator. This stator, which is also individually designed, contains the infrared receiver technology along with the primary coil, which transfers the voltage to the rotating rotor coil. The stator and rotor coils thus form the contactless power supply for the transmitting electronics on the rotating flexplate. Infrared data transmission offers the great advantage that it is insensitive to interference from electrical and magnetic fields. Thus, this system can also be used in hybrid vehicles.

Simulated parasitical loads such as axial force, bending, and temperature differences which are introduced provide information about the resulting strain of the measuring body underneath the strain gauges and thus also about the expected measurement signal. 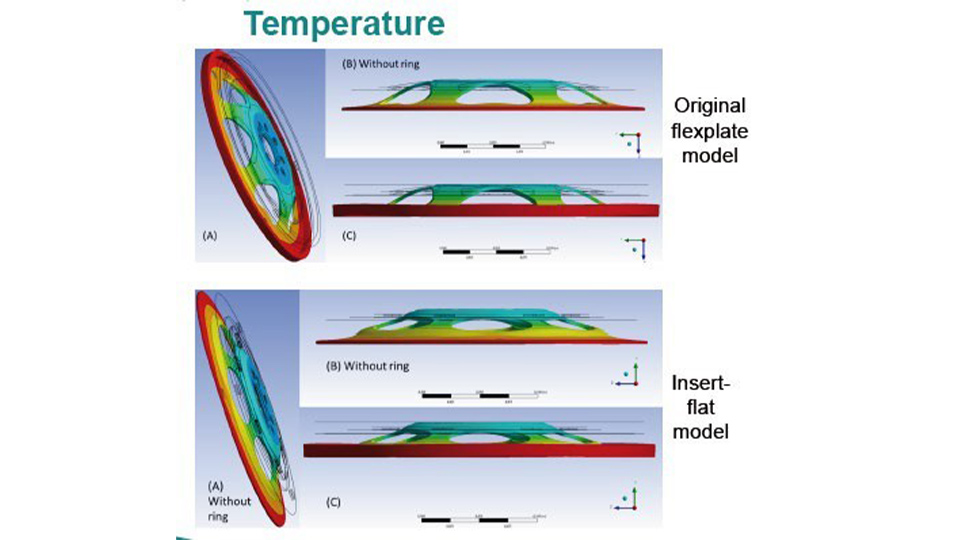 Comparison of the temperature effect on the original component and on the ATESTEO flexplate under the influence of the mounted starter ring gear (lower picture).

Before the ATESTEO flexplate is used, it is tested in various test runs. First, the completely assembled measurement system is calibrated on a calibration test bench. During this time, care is taken to ensure that the flexplate experiences only pure torque without any parasitic loads. Additional tests follow in the ATESTEO climate chamber to compensate for occurring temperature drifts. This requires several test runs until the drift remains within the specified limits. Both the measuring body and stationary components are tested for operability and accuracy throughout the specified temperature range in the climatic chamber and all the measured values during each test are recorded. The climatic tests alone can take several days, as slowly rising and falling temperature curves are followed, so that the measuring system itself warms up completely and cools down again. In addition, an axial force test is performed to determine the influence of an axial force on the flexplate. This influence must remain within the specified limits. A speed test ensures that no components get loosened by centrifugal forces and that the influence on the measuring signal is negligible. If the ATESTEO flexplate has passed all tests, it is installed at ATESTEO in the vehicle to be tested or sent to the customer. About 12 to 14 weeks elapse from the development of the component to installation or delivery. Then the ATESTEO flexplate ensures high-precision torque measurements on the drivetrain.