Your reliable partner in NVH testing

These terms describe audible (noise) or tangible (vibration) vibrations in vehicles. Harshness is the rough transmission of vibrations, felt as a sudden tremor, in the speed range of the motor from 20 to 100 Hertz. Minimising these vibrations such that the end consumer in the vehicle no longer perceives them as disturbing is a major aim during the development of the drivetrain. NVH testing enables early recognition of NVH phenomena, which can then be avoided early during the development stage of the powertrain. This later makes driving in the production vehicle more comfortable and serves to avoid complaints and a loss of image.

For more than 20 years, ATESTEO has offered reliable NVH testing in test benches. At the largest independent European testing centre for drivetrains, our headquarters in Alsdorf, Germany, we test your transmissions during development for audible and tangible vibrations. With our own key equipment for testing powertrains and a total of three of our own NVH component test benches, an acoustics dynamometer, and a test track, we assist you to identify Noise Vibration Harshness phenomena early and to optimise your transmissions during development.

Enabling the recognition of NVH phenomena early during development; thus, avoiding them in later standard production vehicles, is the aim of our NVH test benches. This is accomplished by frontloading the NVH issues during development of the transmission and system. In addition to the conventional NVH test bench, ATESTEO offers two class 1 NVH test benches in accordance with ISO 3745, on which both FWD and AWD transmissions may be tested. Our NVH test benches permit NVH testing of all forms of transmissions, and are set up for the special needs of electric and hybrid drives. An additional electric machine (permanent magnet motor) may be employed to enable HiL testing (Hardware in the Loop).

HiL testing (Hardware in the Loop)

If you would like to learn more about our NVH testing services and capabilities, please call or email us.

We are looking forward to your message!

By sending this form, you are transmitting personal data to us. We use this data exclusively to fulfil your wishes and requirements, in particular to answer your enquiry. Your information, including the contact details you provide there, may be stored by us for the purpose of processing the enquiry and in the event of follow-up questions. The legal basis is Art. 6 para. 1 letter b DSGVO (pre-contractual measures and fulfilment of contract). Your personal data will not be passed on, sold or otherwise transferred to third parties unless you have expressly consented to the transfer of your data beforehand. The legal basis is Art. 6 para. 1 letter b DSGVO (fulfilment of contract) or Art. 6 para. 1 letter a DSGVO (consent). Please note that data transmission on the internet (e.g. communication by e-mail) can have security gaps. Complete protection of data against access by third parties is not possible.

The development of hybrid and electric vehicles involves new challenges for the development of NVH testing. We have taken these into account and met them when developing our new NVH test benches.

Because of the properties of electric drives, new demands on the drives of NVH test benches arise, such as low vibration response or a low system response up to speeds of 20,000 rpm and low noise emission. We respond to these challenges with comprehensive new developments as follows: 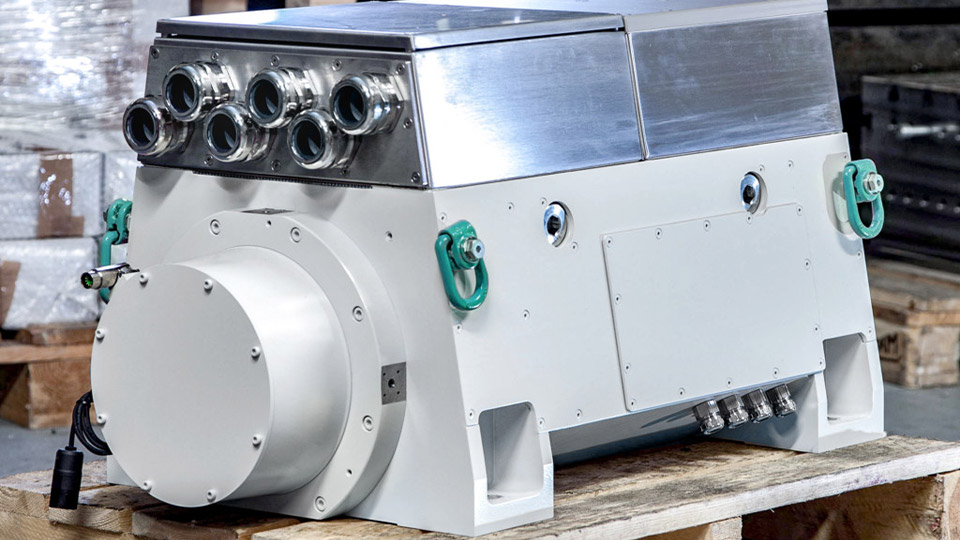 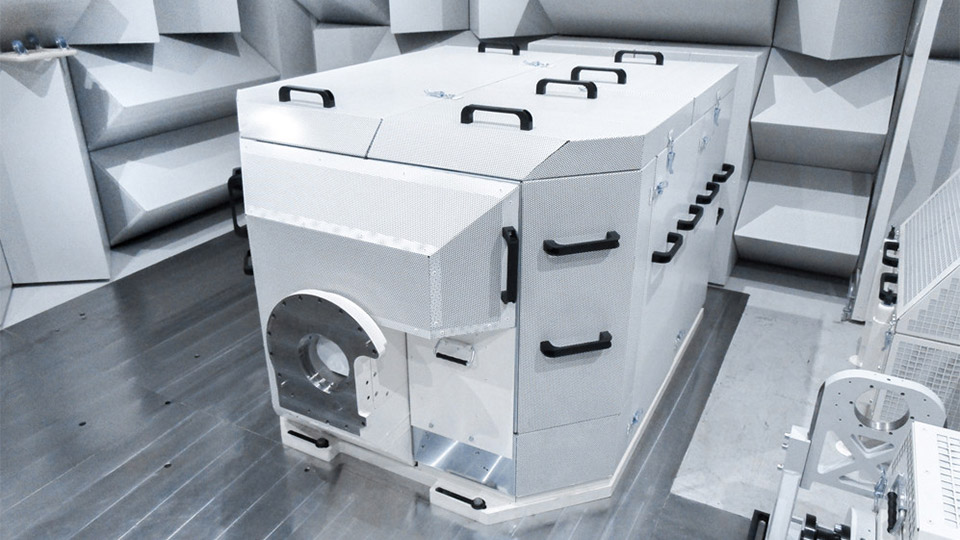 Mount for drive and test object

Array of microphones for measuring sound

Fully automated for high reproducibility and quickly changing out the test object.

For testing electric and hybrid drive systems, it is possible to simulate the correspondingly necessary components of the electric or hybrid vehicle in the NVH test bench. First and foremost, battery simulators are required. 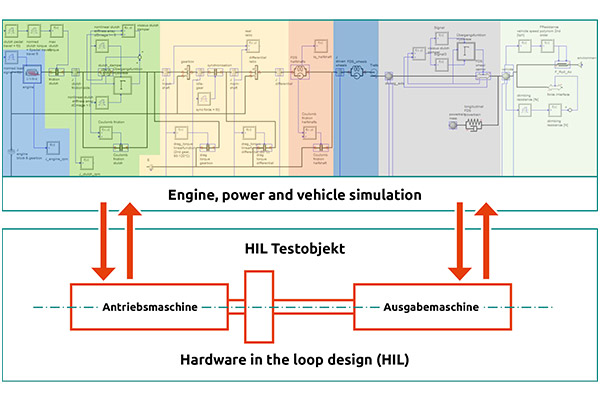 The new test benches are equipped not only for NVH analysis, but also for HiL testing. By using an additional permanent magnet (PM) motor, hardware in the loop simulations may be conducted directly on the ATESTEO test bench. HiL involves testing individual components by substituting a simulation model for the real mechanics and constructing a realistic test environment for the test object.

NVH testing for the entire vehicle

Besides the detection and identification of NVH phenomena on the component test bench, ATESTEO also offers comprehensive NVH testing on the complete vehicle. On the roller dynamometer test bench for acoustics testing and our own in-house test track with a test surface with acoustic absorption properties in accordance with ISO 10844, ATESTEO measures noises and vibrations on the complete vehicle in a secured environment as passenger cars, commercial vehicles, and heavy-duty vehicles are driven. ATESTEO tests all types of drivetrains, from electric and hybrid drive systems to combustion engines. 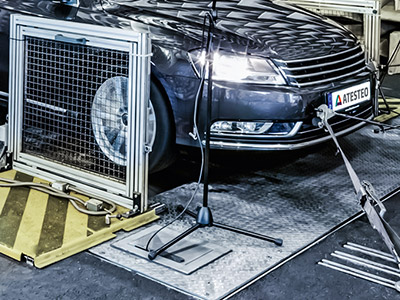 Testing of individual assemblies such as transmissions or axle drives in the entire vehicle for sounds and vibrations on the ATESTEO roller dynamometer test bench for acoustic testing. 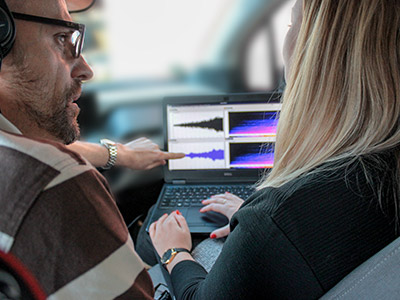 Vibration and noise tests in the vehicle 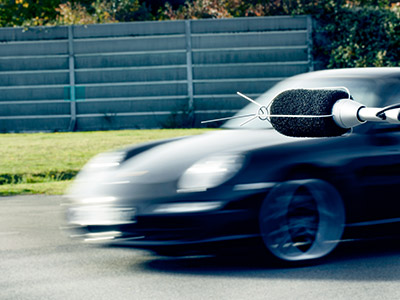 Conducting measurements of exterior pass-by noise during accelerated pass-by driving on the ATESTEO test track in accordance with DIN ISO 362 and Guideline R 51. Data acquisition and analysis of the sound pressure level and driving speed. 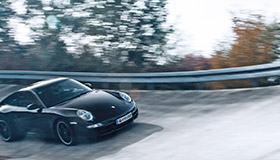 Own test track with acoustic coating according to ISO 10844

At the ATESTEO proving grounds (test track), we can conduct outdoor pass-by noise measurements when the vehicle is driving past under acceleration, in accordance with DIN ISO 362 and according to the new guideline R 51. The vehicle to be tested approaches the measuring site at a constant speed, then accelerates with a wide-open throttle while entering the site until the rear of the vehicle has left the measuring site. During this accelerated pass-by, the sound pressure levels on both sides of the vehicle and the vehicle speed are recorded and analysed. The test track surface is prepared in accordance with DIN 10844 and adapted to the needs of heavy-duty vehicles.

Our expert teams for your NVH testing challenges

We offer you a wide range of services and expertise in the field of NVH testing. Three NVH teams in Alsdorf, Germany support the following fields of activity: 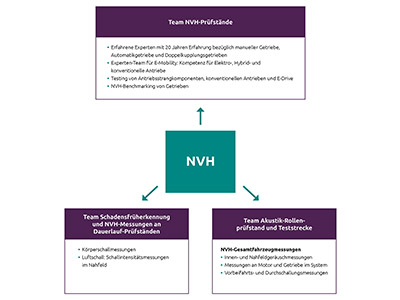 Find all further information about our NVH measurements on the complete vehicle in our current performance brochure. 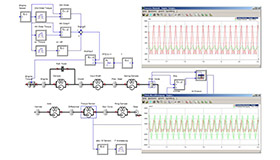 ATESTEO has the know-how and technical facilities to conduct complex simulations; for example, those of the powertrain. This great expertise also flows into the development of new test benches. 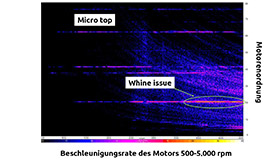 Frontloading during the development phase