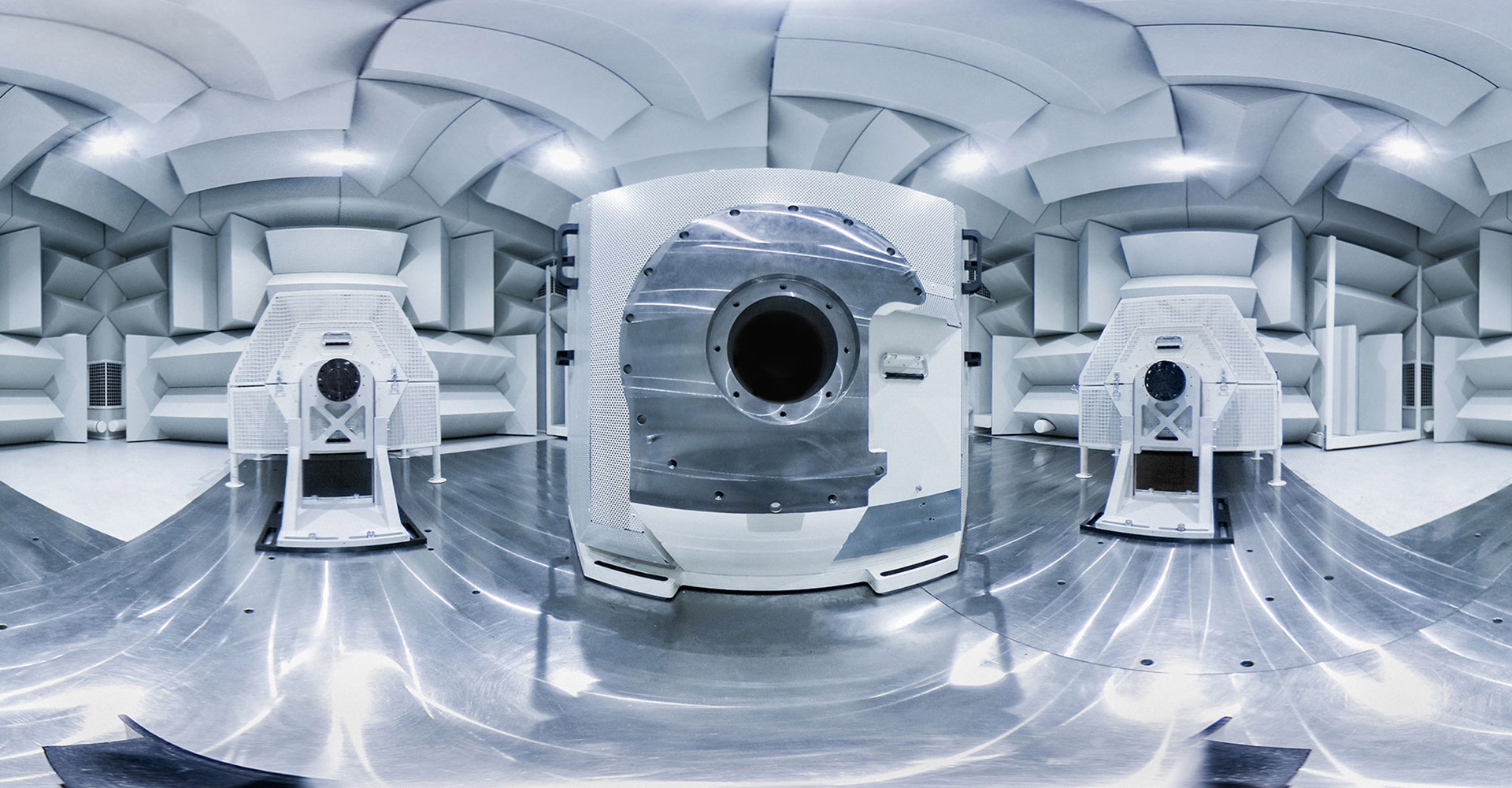 NVH testing is an important point for how satisfied customers are with their vehicles. During testing, it is important to distinguish between desired and undesired NVH effects. Desired NVH effects such as, for instance, the sound of the motor, are meant to address emotions, strengthening the driver’s perception of the delivered performance. Rattling or clonk in the transmission, on the other hand, are undesired NVH effects which the driver often associates with the feeling of qualitatively poor parts or with wear and tear. The topic of NVH is a complex one that is incorporated during an early phase of vehicle development. Therefore, during the development process, test benches on which transmissions and powertrain elements can be tested for NVH-relevant characteristics in an isolated and reproducible manner are needed.

Owing to the complexity of the propagation of sounds and vibrations in vehicles, development processes based on the approach of the sound path model are carried out. For this, individual subassemblies such as the motor and transmission are seen as the source of sound and vibration energy. It is assumed that this energy reaches the vehicle interior through possible transmission paths. For this approach, tuning and predicting the noises in the interior (driver/passengers) and during pass-by (road users), information about the behaviour of the sources of noise as well as transmission paths and their interaction, as, for example, phase shifts through the transmission path, are needed.

Recognise and optimise sources of noise

For the sources of noise of the combustion engine, inverter/electric motor, transmission, and drivetrain, it is therefore necessary to be aware of their generation of sound and vibrations under isolated, defined, and repeatable conditions. Under these conditions, pure transmissions are screwed onto a mount which is as heavy and stiff as possible. Complete electric drive units (EDUs) are accepted into the elastic supports of the mount. Optimising the resulting noises and vibrations at an early stage is critical because the design decisions during development are to be made as early as possible to avoid unplanned development loops.

Early testing of the transmission

The driver for this is the fact that the development of subassemblies such as transmissions needs very long lead times. This results in the need to decide on the design very early, so as to be able to work on and release the final design in the following test and production preparation phases. At this point in time, however, generally there are no NVH vehicle prototypes offering conclusive data for the purposes of checking and release available, because all other vehicle components are being developed in parallel at the same time.

New NVH test benches for all drivetrains and transmission

To optimally meet the current and future challenges of electric and hybrid vehicles, ATESTEO has developed new NVH test benches. The new test benches are prepared to test completely electrified drivetrains and their transmissions in addition to conventional transmissions. Testing the combination of both powertrain forms as a hybrid drivetrain is also possible. During the development of the new test benches, their area of application was extended beyond that of the NVH transmission test bench which has been in operation at ATESTEO for a long time and which makes the relevant transmission noises such as rattling, whining, and clonk measurable for conventional transmissions. 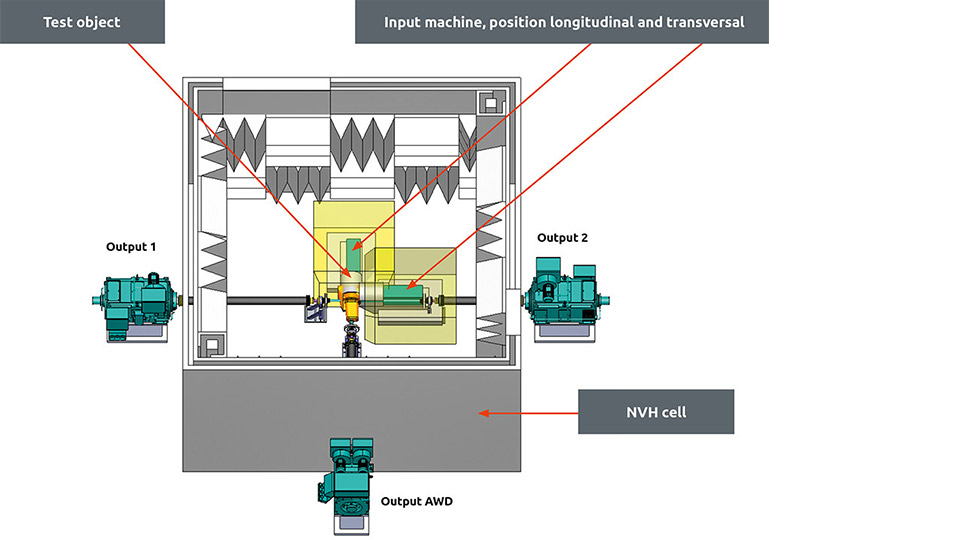 Where the new ATESTEO NVH test benches are concerned, much attention was paid to the set-up of a Class 1 test bench in accordance with ISP 3745. Attention was also paid to the special requirements of testing complete e-axles and transmissions for conventional drivetrains, electric drivetrains, and hybrid drivetrains. In addition, the test bench was designed for a variety of transmission types. An important point in the design is being able to use the differential of the transmission in an unlocked mode, enabling test conditions as close to those of the actual vehicle as possible. This is an entirely new advantage in NVH testing at ATESTEO. For this reason, the new NVH test bench contains a total of three drive machines (electric drive input motors). Along with these three drive machines, the largest possible variability with respect to possible forms of transmission construction is achieved by arranging the drive machines so that they are able to be turned and moved. This permits various forms of construction such as, for example, front transverse for a front-wheel drive vehicle or front longitudinal with an all-wheel drive to be measured on the test bench. To achieve this variability, the drive machine was placed in the NVH cell itself.

Configured for all requirements

The high rotations of an electric powertrain are an important point for configuring the test bench. To achieve these rotations, an electric machine (permanent magnet synchronous motor) is used that reaches rotations of up to 20,000 rpm and has a very small inertia. The high rotations have the necessary high stiffness and a high balancing quality level of the test bench as a result. The new NVH test bench from ATESTEO is also configured for the operation of pure e-axles. This involves a unit composed of an electric motor and transmission, which is why the drive machine of the test bench is no longer needed. For this, in case this becomes necessary, the drive machine is removed from the test bench. For this application, the NVH test bench contains a battery simulator so that the e-axle can be driven directly. A further challenge is represented by, for example, the new coaxial transmissions. In this case, both drive shafts lie on a rotating axle. As a result, one drive shaft runs through the drive machine. To test transmissions with this construction, a hollow shaft machine is used at the new NVH test bench. In addition, the test bench is configured for Hardware in the Loop (HiL) tests. For these, individual components are tested when the real physical mechanics are substituted by a simulation model and, with the use of the machine, a very realistic test environment for the test object is built. 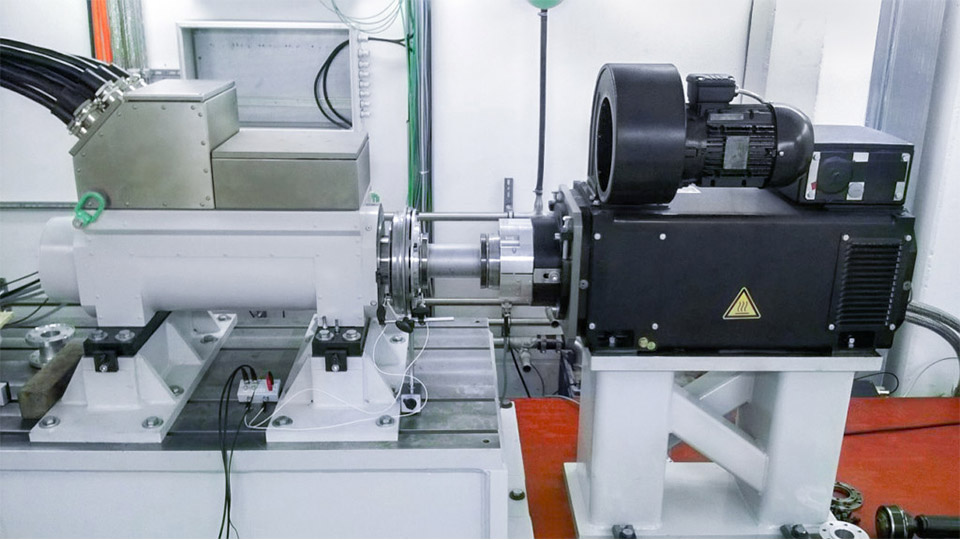 Simulation of the mechanics by machines during HiL tests